A Hug from a Beloved Father on the Other Side 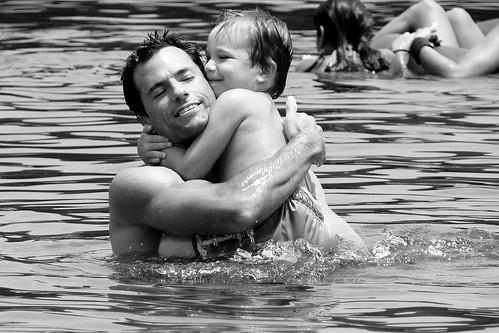 Over the years, I’ve had interesting encounters with loved ones on the other side. This was one of my favorite and more meaningful exchanges. Our ancestors often come forward with this purpose: To express their love.

My husband’s father, Steve, passed away suddenly in September 2008. He died quietly in his sleep in his apartment. He lived thousands of miles away in Sofia, Bulgaria, in Southeastern Europe. Before Steve passed away, my husband, Ivan, stayed in touch with his father via email, but he hadn’t seen Steve in many years. Sadly, I never met him. The following dream felt so familiar as if we’d seen him yesterday.

Six months after he died, my husband’s father visited me in my dreams. He appeared at the door, robust and smiling, and said, “I’m sorry that I didn’t say a proper good-bye.” The word “proper” hung in the air. He realized his departure was sudden, which didn’t allow him time to communicate his love, affection, and good-byes to his children.

Then, he reached out and gave both my husband and me a big hug. There was no physicality to this hug; our shoulders, arms, and chest didn’t touch. Yet, the hug was overflowing with emotion. It was a LOVE hug, a warm-thought embrace. The intention of love filled the dream.

He also gave his children from another marriage, my husband’s half-brother and sister, who stood nearby in the dream, a warm hug, as well.

The final image in the dream was peaceful: Steve was walking with his mother, Anne, by a large river in the Ukraine, her right hand tucked under his arm. The river seemed wide and friendly, a great walking companion – the Dniepro River. Anne appeared as a short, sturdy, industrious woman, which matched her description, according to my husband. Although she lived in California her adult years, she was born in the Ukraine.

Anne and Steve, mother and son, were reunited on the other side. Makes you wonder what they were talking about, all the countless lives they’ve shared, reminiscing lifetimes.

Have you had special communication from loved ones on the other side? A dream? A vision? A feeling? A synchronicity? I’d love to hear about it!

Tags: fathers, fathers and sons, life after death, the other side
← Be Your Own Health Advocate: Accessing the Inner Physician
Pain: the Demanding Inner Voice →