Jan. 24 Outside the Box, Signs and Symbols 2 comments 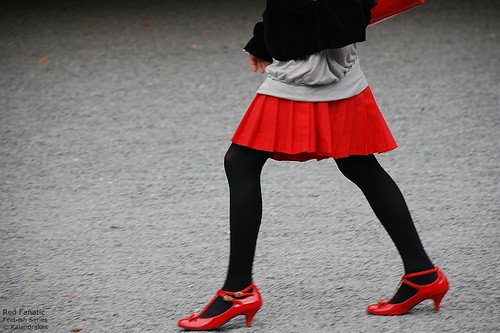 We have a confused relationship with the color red: the color represents both stop and go.

Red is the beginning. In the Biblical story of Genesis, the first human is named Adam, which means “red,” of the red earth or, loosely, earthling. In this archetypal sense, all of humanity is born of earth… and the color red.

Then, we’re confronted with red stop signs and traffic lights.

Too much red, fire out of balance, is a wildfire. Road rage is red. Anger is red. A fever is red. Fire in excess sends the strong reminder to slow down or stop.

The color red has different meanings depending on the situation. The more you acquaint yourself with the color red, the more likely you’ll understand the subtle differences in its shades and meanings. A house in a dream that is bright red on the inside could suggest a highly sensual and sexually active person; a rose colored interior could indicate a new love interest and appreciation of oneself; and a fire engine red interior might signal an infection or a fever. 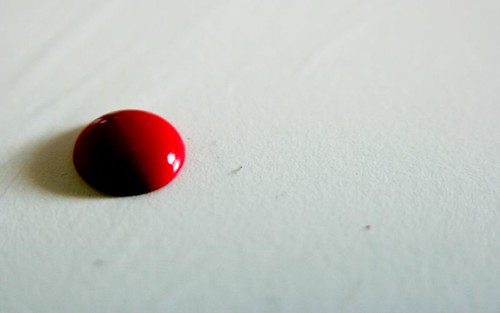 When we lack red, our vitality drips like a leaky faucet and our energy wanes. Red gives life and takes it away. We bleed red – blood – and red pours out. With a blood transfusion, red pumps life back into us. We are revived. Red is the river of life.

In the following two stories, there are four key symbols:

I was standing in the check out line at the grocery, and a woman dropped a bottle of juice. The bottle broke and a pool of dark red juice splattered over the floor. This woman looked familiar. She was lean with short gray hair. She strongly reminded me of a friend, a woman who attends gatherings at our home. The woman in the grocery store was an older version of the woman I knew. When I next saw my friend, she mentioned that her mother was quite ill. Her mother (an older version of herself) was seriously losing vitality (the blood-red juice spilt on the floor).

My husband and I walked into our favorite health food store, and we noticed a man in the store who looked like one of our drum teachers. At the same moment, a store employee was stacking some cases of juice next to us. One of the bottles – again, a bottle of red juice – slipped out of his hand, fell to the floor, and burst open. The next day, our drum teacher revealed to us that his aunt had died, and he was ending the class sooner than expected to attend her funeral.

Red and the First Chakra

Red is a primal fire that also brings up primal fears. Most of us have a volatile relationship with the first chakra, the root chakra at the base of the spine. This is where our fiery survival instincts smolder. When balanced, those energies provide a healthy, vital heat that motivates us and gives life to all we do. When out of balance or overheated, we experience misplaced terrors, rage, misdirected sexual passion, or hyper-materialism — a recipe for personal or cultural dysfunction.

Too often we feel trapped in the root chakra, with an overemphasis on material survival. To feel joy in life, rather than fear and mere survival, we need to shift our awareness upward into higher energy centers like the fourth chakra (the heart center) or the sixth chakra (vision). Then, our material goals are married to a spiritual objective. The profit motive is subjugated by a higher aspiration than surviving. We start caring about how enterprise impacts the world environmentally, socially, spiritually.

Are you trying to decide whether or not to take that new job offer? First, set the intention that green lights will indicate it’s a go, and red lights will mean a no. Life is an oracle: You can always ask for an energy report, indicators of what to expect along the way. Just define the parameters.

Before you hop in your car for this spiritual test drive, ask for help from the Divine with this specific question. Then, take your drive and put your observation glasses on.

What did you encounter on your drive? Was it smooth sailing with many green lights all in a row or did it take you twice as long to get across town? Did you meet with some construction delays and a series of red lights?

Try this exercise and share your observations with us.

Tags: anger, blood, fear, red, root chakra
← Masks and Projections: Getting Beyond the Small Talk
Celebrities Teach Us to Dream a Bigger Dream →