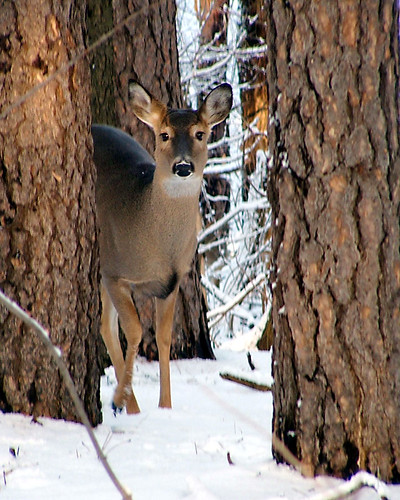 One of the best meditation teachers I know is the deer.

She holds her classes in a grove, by a stream, in your backyard. Observe a deer and your body will synchronize to stillness. You’ll notice her winking and humoring you with her effortlessness. Her feet move so lightly that the leaves beneath her feet are left undisturbed. She moves quietly and gently.

Close Encounter of the Deepest Kind

On a drive to the airport in the small town of Steamboat Springs, Colorado, in the late ’90s, I had an encounter of the close kind with deer. I was picking up my husband after his return from a trip to California. It was dark on this November evening, 8 pm, and a half-hour drive to the airport. I noticed one deer on the side of the road nibbling with contentment on a tree shrub.

I arrived at the airport. The view took my breath away: The airport parking lot was filled with deer! They were meandering, staring at the bright headlights of my car, their heads tilting with curiosity. I stopped and I hadn’t even parked the car yet. I counted them, twenty-five deer in the parking lot.

I stepped into another plane of existence where silence permeated; I entered eternity.

I walked around the airport parking lot and terminal. I even peeked in the airport terminal’s buildings. There was not another person that I could see. No one. Not even airport employees. Just me and the twenty-five deer in the parking lot.

It wasn’t until 20 minutes later that an airplane landed, the one my husband was on, and people started to trickle in through the airport.

I felt like I’d had a meeting with a remarkable spirit, a divine energy. I felt lifted up, opened up, in a state of levitation. It was this experience – meeting the twenty-five deer – that marked a beginning in studying Buddhism more deeply.

I’m not saying that I am a Buddhist. I embrace many religions. After this experience, I immersed myself in further study and contemplation. I prayed with more devotion in my personal life, and in my reading practice. It was the beginning of many beginnings in my spiritual unfoldment.

Deer symbolizes the first sermon of the Buddha, which was held in the deer park of Benares near the Ganges River. A first sermon marks a wisdom initiation. Seeing deer could suggest a sacred introduction to a new level of spiritual understanding, a spiritual birth, receiving a blessing of peace.

In an article on Buddhism and Animals, Sharon Callahan talks about deer in mandalas (or mandaras) to focus meditation.

“In Buddhism, there is a mandara (sacred drawing) which depicts a deer standing on a white cloud with the Tree of Life above its head. Because the deer is considered the messenger of universal love, meditating upon this mandara is said to open one’s consciousness to the mystery of infinite peace.”
— Sharon Callahan

According to Vedic philosophy, there are three types of primary energies in food, personalities, health, in all of life.

The deer is sattvic in nature and has a calming, peaceful influence. In contrast, the energy of tiger is rajasic, which gives one fierce determination, persistence, and endurance.

Animals serve far beyond their role as domesticated animals, as our trusted companions. They represent spiritual qualities that we can incorporate into our spiritual practice. Deer radiates purity and serenity. Deer is grace. Her gentle movements remind us to slow down enough to feel the caress of the air on our arms, the warmth of the sun on our forehead, and the sweet earth beneath our feet.

Deer on the side of the road

When we hit a deer in a car accident, this could suggest that we are confronting our own critical attitudes toward ourselves. So much wounding in the world is self-inflicted. We may unknowingly punch ourselves with our hateful thoughts. The gentleness of deer says, “Let me heal these bruises with tenderness, and teach you tenderness towards yourself.”

Deer teaches gentleness and quietude. She also brings peaceful resolution. Seeing several deer in your backyard or on your property could indicate that an amicable solution to a tough problem is approaching.

Tags: buddhism, deer, mandalas, symbols
← Is Free Will Really Free?
You Like Me! You Really Like Me! →